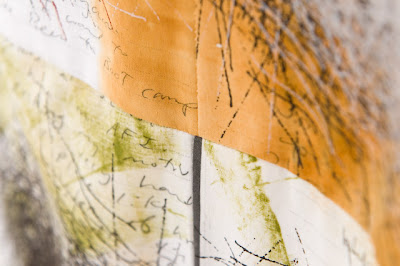 For the exhibit “Materials and Methods: A Multimedia Exploration in Textiles” at ACME Art Studios in Wilmington, local artist Leslie Pearson was so inspired by students in the textiles program at East Carolina University's School of Art and Design that she opened up the exhibit to them, as well as to the school's faculty.
The resulting exhibit, which opens with a reception Friday in conjunction with Fourth Friday Gallery Night, features new work that interprets the use of textiles and techniques and utilizes traditional and experimental approaches to making art. Featuring textile- and fiber-based artwork, the exhibit ranges from contemporary quilts and sculpture to video, book arts and digital weaving.

Pearson is a master of fine arts candidate in the textile program at ECU, and although a full-time student, she has a studio space at ACME Art. A self-described multimedia artist who loves to experiment and try new materials, Pearson enjoys the process of making things with her hands, creating something that didn't exist before.

“(It's) almost more significant to me than the final product,” Pearson said by e-mail from Canada, where she was attending the Olympics. Pearson also documents her output using time-lapse video.

Originally attending ECU with a concentration in painting, Pearson soon found that working in textiles made for greater variability in ideas.

“(I) found it freeing to break away from the rectangular, two-dimensional surface of a canvas,” she said.

Fiber-based work extends beyond traditional design and materials can be as diverse as silk, yarn, paper or hog intestines. There will be three small sculptural gut pieces on display in “Materials and Methods.”

“While every medium does have its own set of challenges, I feel the field of fiber arts is broad and seemingly limitless,” Pearson said, adding that contemporary fiber artists continually push boundaries of the art form, and by doing so, have redefined what textiles are. “There's a strong tie to traditional methods like fabric collages, quilting, lace making, felting and beading. They (also) utilize new technology to incorporate video and audio components (and) create digital weaving and digitally printed fabrics.”

Robin Haller, an assistant professor in the textiles department at ECU, describes the digital weaving process for crafting some weavings on display in “Materials and Methods,” weavings created using JacqCAD Master software.

“JacqCAD is a weaving program that works in direct correspondence to a grid and uses pixels as coordinates,” Haller said. “This software also allows the artist to translate a finished design into a format read by the TC-1 jacquard loom. This modern-day version of the ancient draw loom and 19th century punch-card loom controls each warp thread independently, allowing the weaver great flexibility on designing. The blueprint of the weaving is predetermined by the computer design, but the finished piece is still woven by hand.”

At ECU, students digitally design weave structures using software called WeaveMaker, where they share access to a 16-harness, computer-assisted loom with which to execute designs. By using digital technology, students are able to work with multifaceted weave structures.

Pearson said students are encouraged to explore artistic expression in the field of textiles. It was during the fall semester that she was inspired by the fiber-based work by students under the guidance of Christine Zoller.

“They were able to take textile ideas and techniques and incorporate them into their own work,” Pearson said. 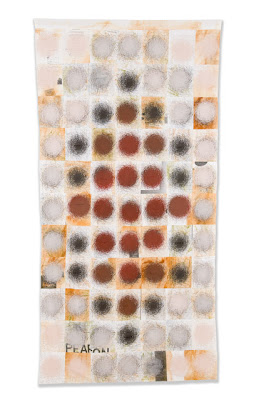