Poplar Bluff has a special place in the heart of artist Leslie Pearson. A 1994 graduate of Poplar Bluff High School, Pearson's art will be on display at the Margaret Harwell Art Museum starting Saturday and running through March 28. An opening reception will be held from 6-8 p.m. Saturday at the museum.

"I grew up in Poplar Bluff, so I took all of the art classes available in school that were offered and then went on to study further at Southeast Missouri State and continued on after that," Pearson said earlier this week. "So I'm pleased to be showing my work at the Margaret Harwell because it brings me back to my home town. I'm on the road heading there now."

Pearson's show will be called Eco Prints, which refers to an artistic technique where plants, leaves and flowers leave their shapes, colors and other marks on paper, Pearson said that plant material is bundled in layers of paper, soaked in mordants and modifiers, then steamed to release the dye found naturally inside the plant. This creates a contact print in the shape of the leaf or the flower.

"During the COVID lockdown, I became very interested in my natural surroundings, specifically plants - discovering how they can be used as medicine and how they can be used in my own work as an artist," Pearson said. "I began doing Eco Prints of the local and indigenous botanicals in my regime of North Carolina."

Pearson said that she decided to give those small prints more of a presence by enlarging them on fabric and then adding layers of encaustic medium, which is a mixture of molten beeswax and damar resin.

"On some of the pieces, I have also included text-based layers - old letters, dictionary pages and botanical writings as a way to give the work more visual texture and allude to a narrative," Pearson said.

After graduating from PBHS, Pearson graduated from Three Rivers College in 1995 and obtained her bachelor's degree in fine art from Southeast Missouri State University. While at SEMO, she was heavily involved in community arts programming, serving as the assistant director of the Arts Council of Southeast Missouri and also as the co-curator of Gallery 100 and the Lorimier Gallery in Cape Girardeau.

Pearson earned her master's degree in 2000 at Newcastle University in England and also completed an internship at the Northern Gallery for Contemporary Art in Sunderland, which is in northeastern England. She later served in the Army as a photojournalist and public affairs specialist for the 513th Military Intelligence Brigade at Fort Gordon, Georgia.

More of her work can be seen on her website: www.lesliekpearson.com 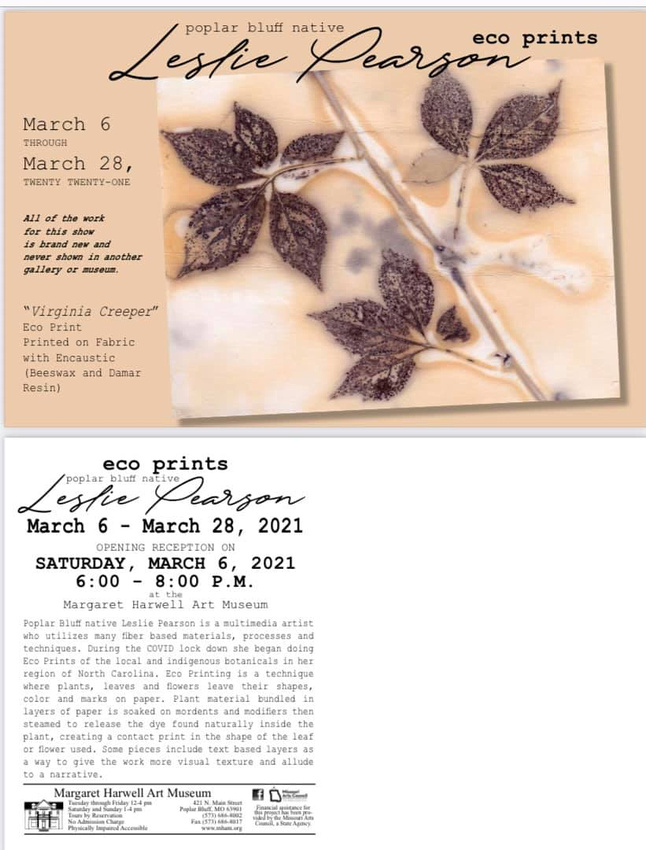