Mountain to Mouth Brings Communities Together 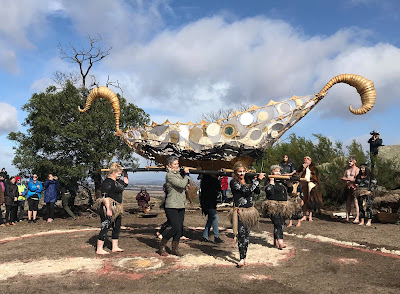 In its third reiteration, Mountain to Mouth has once again proven to be a great unifier of local communities, consolidating its reputation as a must-do event.

Walkers from across Victoria converged on the City of Greater Geelong and the Borough of Queenscliffe to participate in this biennial event.

The three main ceremonies, Gathering of the Elders at Big Rock; Gathering of the City as part of Geelong After Dark, and, on Saturday night, Gathering of the Elements, on the Barwon Heads foreshore, were among the many highlights of the 80km extreme arts walk covering the City of Greater Geelong and the Borough of Queenscliffe. Drawing thousands of people, the Ceremonies were described as ‘uplifting’, ‘moving’, and ‘life-affirming’.

Walkers followed the lead ephemeral sculpture, Canoe, created by Ocean Grove artist Kerrie Bedson in collaboration with US-based artist Leslie Pearson, from the You Yangs to Barwon Heads. Canoe was a commission made possible by Deakin University. Bedson and Pearson were successful in obtaining the Commission after a rigorous Expression of Interest process. Many walkers expressed their appreciation of the extraordinary diversity of the landscape and the way different communities came together to create art that was an expression of their local land. As is the tradition, the walk culminated in the burning of Canoe, sent out to sea on the Meme, named in honour of founding Artistic Director Meme McDonald.

In keeping with the 2018 theme, Artistic Director Margie Mackay wove a narrative of hope for the Earth; that which sustains; that which nourishes; and that which heals. The nine songline stations and the three Ceremonies embodied Mackay’s ethos and in turn, has further consolidated the foundation of this multi-award winning event.

Mountain to Mouth is made possible by the support of Founding Partners Deakin University, Gen-U, the Borough of Queenscliffe, Corangamite CMA, Parks Victoria, Diversitat and, most importantly, the guidance, knowledge and wisdom of the Wadawurrung Corporation and the Wathaurong Co-Operative, specifically Uncle Bryon Powell and Corrina Eccles. The support received from Partner Sponsors WorkSafe, TAC and Geelong Connected Communities go a long way to ensuring that the City of Greater Geelong is embracing a Clever and Creative future. 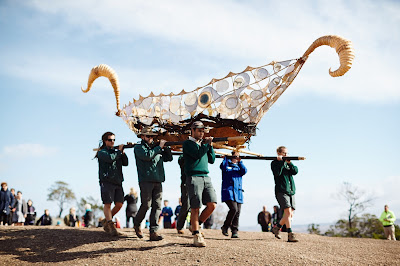