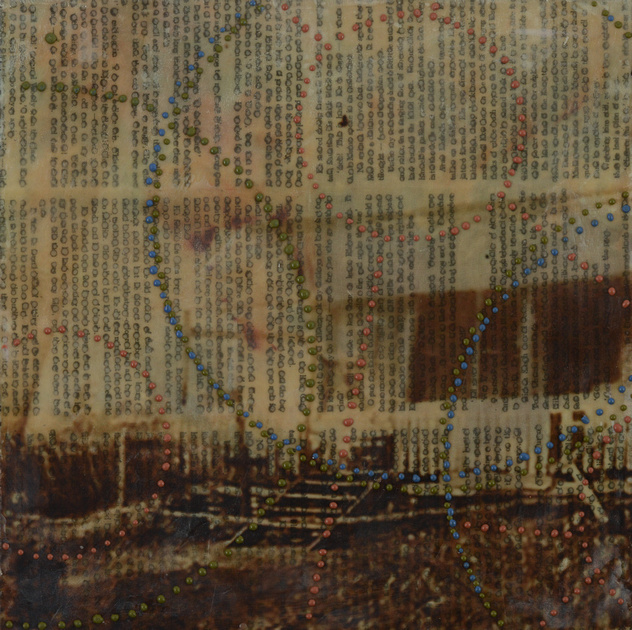 MONTAGE AND MORE: GROUP SHOW AT ACME FOCUSES ON COLLAGE

It seems like collage as an art form has been around for centuries, yet, the term and genre as we are familiar with did not emerge officially until the 20th Century.

The leading Cubist artists, Pablo Picasso and Georges Braque, added non-painted elements to their work to provide a new perspective, which, ultimately, reflected the evolution of modern art. Though not invented by Braque and Picasso, collage can trace its origins back to Japanese calligraphers who used to apply glued pater to create texture when writing poems. Gold leaf and precious gemstones were applied to painted panels of Gothic cathedrals in medieval Europe, and collage methods also were employed by hobbyists for memorabilia albums.

Today collage is not as shocking as those works by the rebellious Picasso, but they are vitally important and relevant to the current art world and production. Always keeping us informed on the most cutting-edge local works, Acme Art Studios reminds us through their latest exhibition, “Collage,” of the importance of emerging artists flourishing in the medium.

The idea for the exhibition came from Acme and local mixed-media artist Michelle Connolly. “After coming back from a trip to Australia, I took a look at our winter calendar and noticed that the first couple of months were looking empty,” she explains. She has taken on a curatorial role with the exhibition and summoned over a dozen artists showcase work. “I wanted to invite fellow artists whose work I admire, focusing on the common theme of collage,” Connolly states.

Connolly also wanted to open doors for new emerging artists like Mavis Martini. A film-set decorator by day and collage artist by night, Martini will make her inaugural debut in a public art space. Having lived in Wilmington since 1989, she always was drawn to creative endeavors. In fact, she can’t really pinpoint when she became an artist.

“When I was in college, I used to cut up magazines to make party invitations and band flyers, so that could be when I started doing collage,” Martini ruminates.

When Martini moved to Wilmington, she started channeling her creativity in the film industry. Currently, she’s working on “Under the Dome.” But her personal passion for collage was reignited during Cucalorus 2012.

“After seeing the film ‘Beauty is Embarrassing,’ I felt inspired to do something fun for no reason but my own amusement,” she says. “I was going to decoupage something, but it didn’t really work, so I just started making my ‘modtages’ instead.”

Martini coined “modtage” as a play on words, which refers to a montage’s combination of elements and the glue product, known as Mod Podge, used in decoupage. “Beauty is Embarrassing” follows the story of puppeteer Wayne White’s journey to see his dreams as an artist come to fruition. His infallible dedication struck something within Martini, who now creates her own colorful and dynamic art.

“I’m inspired by the aesthetics of the advertising world of the 1950s through the mid ‘70s,” Martini notes—“the optimism and excitement for the future they reflected in what seems now to be an irrational exuberance or even absurd.”

Aside from finding inspiration through retro advertising, Martini also combines manufactured images with the natural world. “There’s never a shortage of National Geographic at the thrift stores!” she quips.

Alongside Martini, artist Leslie Pearson will showcase her works, too. After moving to Wilmington in 2006, she met Connelly at Acme and has begun to integrate herself into the arts community. Working in a variety of mediums, Pearson primarily works in encaustic painting, bookmaking and sculpture. The pieces she features in “Collage” consist of layering.

“One piece in particular, ‘Lottie’s Place,’ is a mixed-media painting that incorporates burned book pages, encaustic medium, a digitally printed image on silk crepe de chine and pigmented wax,” Pearson explains. “Combined, these layers begin to reveal a narrative to the viewer that is simultaneously haunting and calming. The mystery of the image is balanced by the order and rhythm of the burned-away, alluding to the notion that there are, and will always be gaps in the story of our personal histories.”

Pearson notes she creates pieces in response to new challenges, environments, and relationships. Such elements focus on memory, identity, and communication.