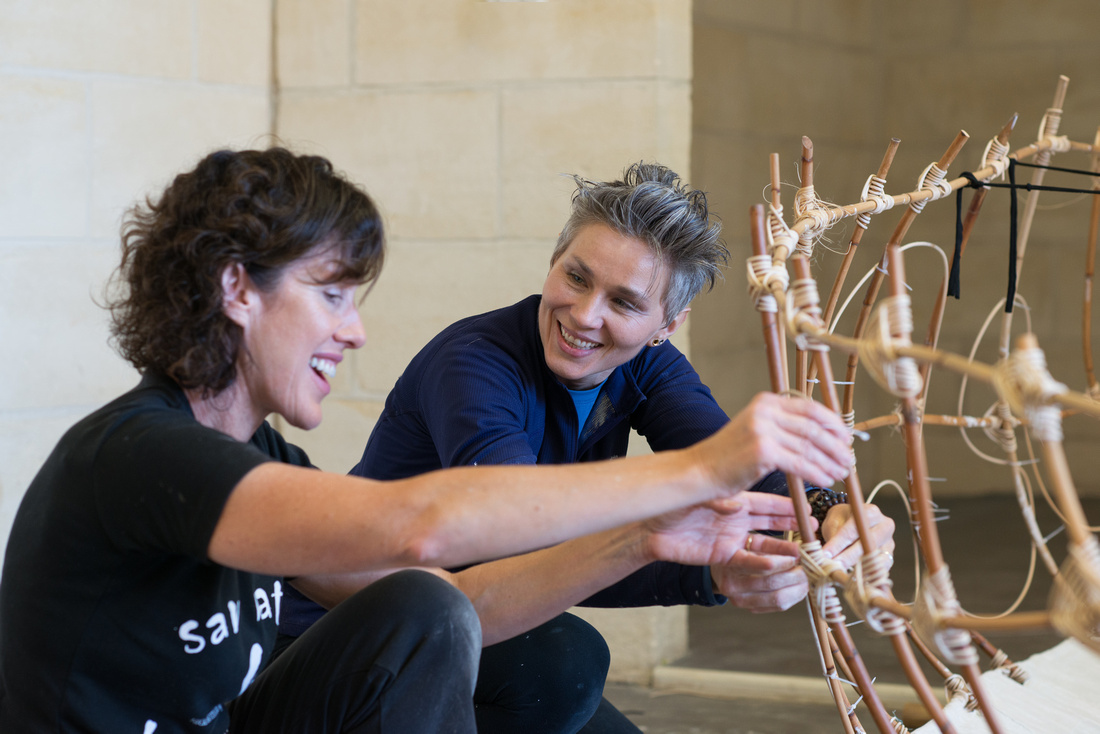 Hog intestines? Not so much.

But that’s one of the materials local artist and business owner Leslie Pearson uses in her works. Her unusual approach recently helped earn her a role in an innovative project on the other side of the world.

Pearson is co-owner of the Fayetteville Pie Company in Westwood Shopping Center. She also sits on the board of the Arts Council of Fayetteville/Cumberland County.

“I was looking for a material that would allow for translucency,” she said. “I tried leather, I tried paper. Then someone introduced me to hog intestines.”

Pearson uses the material to stretch over the framework of her sculptures, like a skin. When dried, it has a paper-like consistency.

Held every two years, the “Mountain to Mouth” event involves creating a sculpture using all-natural materials. The event is so named because it starts at the top of the You Yangs Mountains and ends at the mouth of the Barwon River.

The sculpture is carried about 50 miles through the Australian countryside, with ceremonies held along the way to mark its passage. At the end of the journey, the sculpture is set afire.

The theme for this year’s event was “Earth.” Bedson and Pearson collaborated online on a design for the project, which was accepted by Mountain to Mouth organizers. In mid-April, Pearson traveled to Australia, where the two artists set about building the sculpture they had designed.

The sculpture was called “Canoe.” It was built of materials including cane, bamboo, paper — and of course, hog intestines.

The resulting work was six feet long and four feet wide. “We needed it to be lightweight but structurally sound,” Pearson said.

After its completion, volunteers carried the sculpture and other smaller ones through the city of Geelong, about 50 miles southwest of Melbourne, and through the You Yangs mountain range. At the end of its journey, it was set afire on the waters of the Barwon River.

The materials had to be non-toxic so as to not contribute to pollution.

“Since it was made with all natural materials, it went up really fast,” Pearson said. The masthead of the sculpture was preserved to be put on display.

For Pearson, one of the most fascinating aspects of the experience was interacting with the people she met along the way and participating in the ceremonies staged around the project.

“Thousands of people participated in it. It was amazing,” Pearson said. “Everything was about the earth and being mindful of how we’re connected to the land and what our effect is on the land. For me, it was a spiritual experience, and I think that was the whole intention.”

Staff writer Rodger Mullen can be reached at [email protected] or 486-3561.