Each year the Arts Council of Fayetteville/Cumberland County gives Regional Artist Project grants to artists living in 15 counties. Called Art Lives, the show is now on view at the Art Center. It showcases the work of the 11 visual artists who received grants.

Wilmington artist Leslie Pearson, formerly of Fayetteville, was selected for her encaustic (hot wax) paintings. She shows five in the exhibit. One contains prayers she wrote on silk and embedded in the wax. The most exciting piece is a large, nest-like sculpture titled "That Which is Empty, May Be Filled.''

While working on the piece, she set up a camera to take still pictures every 30 seconds. At the end of the project she combined the hundreds of images into one time-lapse video in order to document the project. It shows her working at an impossible and humorous speed.

She says she did the project in response to the issue of infertility. While working on the nest for about two months, she posted images of it on her blog and Facebook page, which prompted responses from people who have infertility or empty home issues.

"Some people were simply interested in the aesthetic appeal of the sculpture and liked its shape and texture'' she says. "In the end, all of the responses became part of the piece because I cut them up and embedded them near the surface of the inside. This gives it one more layer of depth.

"Viewers can read the text if they take the time to look closely."

She decided to paint the nest a bronze color using several layers of brown glazes. She added wax to the inside.

"That gives it a sense of vulnerability and heaviness, which alludes to the delicate subject matter," she said.

Pearson works at ACME Art Studios in Wilmington, and is a candidate for a Master's of Fine Art in the textile program at East Carolina University's School of Art and Design. 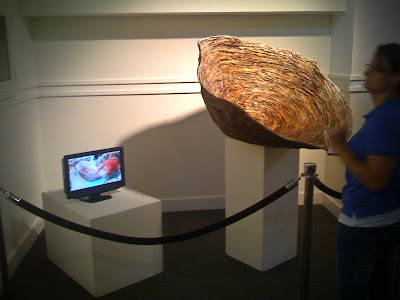 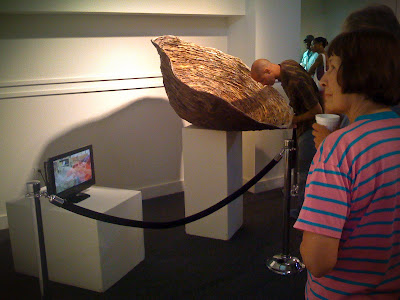