“I find relevance to my own life in the Scriptures,” she said at the opening of her show last Friday at the Cape Fear Studios. “As I digest the stories, I am able to communicate them through painting.’’

The show is titled “Resonance and Relevance,’’ and almost all of the 13 paintings have a biblical theme and tell a story. The hand-painted text on the work explains, or gives a hint, of the meanings.

“Pouring Out” depicts a young woman who is disturbed because she is barren. The story, taken from the book of Samuel, refers to Hannah. After she struggled with the problem, Hannah left it all in God’s hands, and thereby received peace. “She poured herself out” are the words hand-painted above the oil painting. Pearson under-paints with acrylics, then finishes the paintings with heavily textured oil paint.

In “Princess Warrior,’’ she veers from the Bible and straight into comic books to show the star-spangled super heroine, Wonder Woman. The fictional character was Pearson’s idol from age 5, she said, because of Wonder Woman’s beauty, talent, ability to do good and her warrior spirit.

“Phoenix Rising’’ is a dramatic painting in which she used herself as a model. The painting refers to the phoenix bird rising from its ashes to symbolize resurrection. The immortality refers to the biblical story of Jesus bringing a small child back from death.

In “She Believed,” Mary is shown in a blue mantle, which is a symbol of humanity and of purity of heart.

Pearson, who is a Missouri native, earned a bachelor’s degree in fine arts from Southeast Missouri State University. She worked in a community arts program as assistant director of the Arts Council of Southeast Missouri. In 2000, she moved to England. There, she earned a master’s degree in museum studies at the University of Newcastle. When arts funding was cut in Missouri, she lost her job. Later she joined the Army, where she worked as a photojournalist for two years. As a result of losing her hearing in one ear, she left the Army. Now she works full-time as an artist. She and her photojournalist husband, Justin Pearson, own Pearson Gallery.

“The Virtuous Wife’’ painting comes from Proverbs and reads: “Who can find a virtuous wife? For her worth is far above rubies.”

Pearson says she earned the title after the couple bought a house to fix up, but when her husband was deployed to Afghanistan, she took up the task.

She re-enforced floor joists, installed a commode, scraped, sanded and painted the house with the help of two other Army wives.

In that collage, she used scraps of materials left over from the project, such as old paint and used sandpaper. A chalk drawing of the exterior and 12 photo transfers give viewers a glimpse into the progress of the reconstruction.

‘RESONANCE AND RELEVANCE’
What: The artwork of Leslie Pearson
When: The show will be on view through March 26.
Where: Cape Fear Studios, 148 Maxwell St.
Information: Call 433-2986 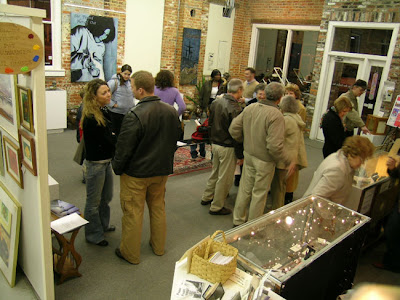