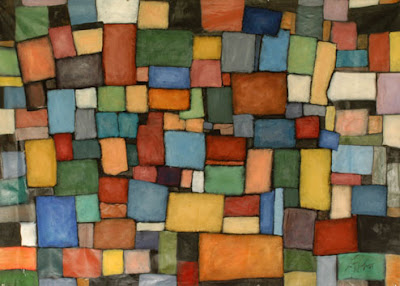 Leslie Pearson returns to SfL+a Architects Gallery this month. Last year she showed abstract works inspired by living in Newcastle, England, where she was a student in 2002. She became fascinated with the historic architecture, especially windows and doors that had aged over the years leaving erosion, rust and unusual patterns. The work was based around squares and boxes, forms that have fascinated her all her life.

This time, she combines several of her series with an emphasis on lines, boxes and squares brightened up with the use of primary colors.

I pulled it from a series I called ‘Red, Yellow, Blue,’” she says. “Basically, what I was doing was an exercise in color recollection. When we hear the word ‘yellow’ we get a visual of that color in our minds. I wanted to see if it evoked any different emotion in people if they saw the word paired with a different color — if they saw the color yellow written, (on the painting) but the color would actually be blue.”

The real beauty in the show is “Sewn Squares,’’ a large wall hanging made with oil painted fabric pieces together in random sizes and shapes based on squares that are a little jazzed up. Her squares are anything but square. They are loose and seem to want to dance off the canvas.

From her “Bird on A Wire” series comes a bird about to fly away. Printed words across the canvas read, “I can almost taste the freedom.” Another work in the bird series shows a bird ready to fly and reads, “It’s a dangerous game when the stakes are so high.” The painting “Put me in a box and I’ll get out’’ shows three boxes above the words. She painted that series after her stint in the army was over. She was a photojournalist until she lost hearing in one ear.

“What I try to do is use my art as a means of communicating with people,” Pearson says. “I want my art to engage people and evoke personal reflection. I also feel like being an artist is what I’m truly meant to be doing with my life, because I’m passionate about it, so I want to glorify God with what I do. I try to do that by staying true to myself and continually work to be successful.”

She and her photographer husband, Justin Pearson, have opened Pearson Gallery, where she works on her art full time.