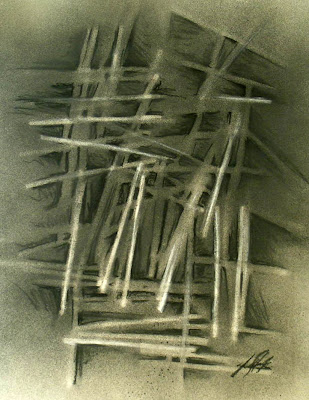 Whether you call it abstract, nonobjective or non-representational art, it seems you either love it or you hate it.

Why? For one thing, it doesn’t tell you what to think. You have to use a little imagination and conjure up your own ideas. Or you can just enjoy it for it’s colors, composition and patterns or because it’s interesting to look at.

Leslie Pearson chose to show abstraction in her most recent show, which opened on Fourth Friday at the Shuller, Ferris & Lindstrom Architects Gallery.

She works in a variety of styles and mediums and has shown her landscape paintings in “Public Works’’ at the Arts Center and in a one-man show at Market Square Gallery.

But where better to show her abstract works featuring geometric shapes and patterns than in an architects’ office? Especially apropos is her mixed-media series titled “Newcastle Architecture.’’

The series is based on the colors, patterns and shapes she observed in Newcastle, England, while she was a student there.

Pearson, who is 29 and a Missouri native, earned a bachelor’s degree in fine arts from Southeast Missouri State University in 1998. After graduation she worked in a community-arts program as the Assistant Director of the Arts Council of Southeast Missouri. In 2000, she moved to England, where she earned a master’s degree in museum studies at the University of Newcastle.

The year in England inspired her Newcastle architectural series.

“In Newcastle, I lived in a small room and started working with small shapes. I became fascinated with the architecture around me, the history and the alleyways, the Post Industrial doorways, windows and the erosion of the windows where, over the years, rain dripped down creating streaks of color.’’

If you look carefully at the Newcastle pieces, you can see the drip marks, the erosion and the rust. Each piece is mounted on a small box that once held the candy bars Pearson ate in England while she worked. She liked the shape of these and mounted the mixed-media pieces on them.

“I started with wallpaper paste and adhered the canvas to the surface,’’ she said. “Keeping the ragged look around the edges, I began painting with oil, layer over layer, letting it drip and scrumbling over it to pick up texture. I let whatever happened happen. After I had done one, then that piece spoke to another to see what would happen. I am never short of ideas, just short of time.’’

In the north gallery she shows 11 oil-pastel paintings on paper titled “KCMO (Kansas City, Missouri) Searching for Self.’’ The inspiration for these came after she returned home to Kansas City just as the Sept. 11 terrorist attacks occurred.

“I had wanted to work in a museum, but after that happened, the funding for the arts was cut back in Missouri,” she said. “I had to pay back my student loans. I wasn’t sure what to do. It was a time of searching for self. Making art makes sense to me when nothing else does.’’

While creating the “Searching” series, she made up her mind to join the Army. It gave her a job, a place to live and money to pay off debts, she said.

For two years she worked as a photojournalist until she lost the hearing in one ear and got out of the Army. She and her Army photographer husband, Justin Pearson, have opened Pearson Gallery, where she works at her art full time.